It’s time to squeal on feral pigs in Alberta.

Wild boar at large, also known as feral pigs, are one of the most damaging invasive species in the world. They pose a significant threat to our ecosystem, as they can wreak havoc on fields, pastures, wetlands and natural areas. Wild boar at large are also known to predate on young livestock and wild animals and they also have the potential to spread disease among both wild and domestic animals.

As a result, the Alberta Invasive Species Council is asking all Albertans to watch for of signs of wild boar at large and to report any sightings or wild boar damage to the Council, the Alberta government or their local municipality.

“(Wild boar) are considered to be the most damaging invasive mammals in the world,” explained Megan Evans, executive director of the Alberta Invasive Species Council, adding that wild boar can destroy an entire field in one night as they look for tubers and grubs to feed on. 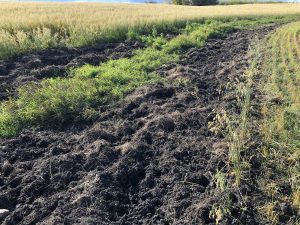 We strongly encourage folks to hop onto our website – https://abinvasives.ca/squeal-on-pigs. There you will find pictures of damage caused by these things, pictures of their tracks, what their (trails) look like and what it looks like when a group of them have gone by.”

It is especially important for producers who are noticing damage to their land and crops to take a closer look to determine whether or not wild board at large, or another species, are causing the problems.

And while damage to the landscape and crops is a significant concern and can lead to significant losses, wild boar pose a much larger risk.

“The real, real risk that we are worried about is the spread of disease,” explained Evans. “Pigs can have a lot of diseases … and some of those can be transmitted to humans, wildlife, or livestock.”

According to the Council’s website, wild boar at large are known to host 89 different disease. Some of those diseases – African Swine Fever and foot and mouth disease – can come with big economic consequences.

“For example, in the event of an outbreak of foot and mouth disease that would cause the immediate closure of our Alberta beef and pork exports,” explained Evans, “which would be absolutely devastating.”

At large on the landscape

Wild boar were brought to Alberta from Europe in the 1980s and 1990s as part of an effort to diversify agriculture. These initial animals were crossbred with domestic pigs to create today’s wild boar.

“That process ultimately created this amazing species,” explained Evans. “It had all the characteristics of a wild animal, and it was really smart, and really big, but it was also a livestock species that breeds really quickly and has lots of offspring.”

Each wild boar sow can have an average of 12 to 18 piglets per year, which can result in exponential population growth. Additionally, the wild boar proved hard to confine and many escaped their enclosures, said Evans, while others were intentionally released when the bottom fell out of the wild boar market. Some wild boar farms remain in Alberta today; however, these farms are required to meet strict standards, including containment measures, in order to operate.

“They are really hard animals to manage and to contain so the combination of those things resulted in the animals roaming and becoming feral on the landscape.

“Ultimately, we’ve had a problem with them – a noticeable problem that people have been talking about – since the nineties or early 2000s.”

This problem is not isolated to Alberta. There have also been wild boar reports in Ontario, Manitoba, Saskatchewan, and British Columbia. The Prairies are the wild boar ‘hotspot’ for Canada, said Evans, with Saskatchewan as the epicentre of the wild boar problem.

In Alberta, the wild boar at large population is concentrated in central Alberta, around the Edmonton area. However, there have been sightings of wild boar in many other areas of the province as well.

Removing wild boar from the landscape

Enter the Wild Boar at Large Eradication Project, a three-year pilot project between Alberta Agriculture and Forestry and Alberta Pork, which involves the “coordinated and strategic removal” of wild boar at large from the Alberta landscape.

“Alberta is unique in that we actually have an eradication program and we’re only province with a coordinated eradication program,” explained Evans. “We have folks on the ground tracking wild boar at large using trail cameras, drones and reports from the public.

“Once they find a group – these animals live in groups called sounders, and those are all the females – they will set up corral traps that they can monitor remotely and they will wait until all the members of the group are inside and then they will close the door and remove the entire group from the landscape.”

“What happens is if a hunter goes in a removes one or two individuals, the remaining pigs learn from that experience to avoid humans,” explained Evans. “They will avoid being hunted or trapped by humans – they’ll go nocturnal, they’ll disperse.

“These are really smart animals, we all know how smart pigs are and these are wild boar, so they are smarter than domestic pigs. And they will actually teach (those behaviours) to their offspring.”

How you can help with wild boar eradication

While control of wild boar at large is the only option in some jurisdictions, Evans said that in Alberta eradication is still possible, as this province takes invasive species very seriously, pointing to our rat-free status. However, all efforts, including education and reporting sightings of wild boar at large, would need to be increased. 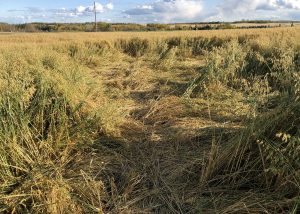 “So hop onto our website – we have a Squeal on Pigs page – and look at the images of tracks and scat.

“We want people to squeal on pigs, if you see something, say something.”

Here’s how you can report sightings of wild boar at large or evidence of them:

Reports of wild boar at large can be made using the free invasive species reporting app, EDDMapS, available on the Alberta Invasive Species Council website, by emailing AF.wildboar@gov.ab.ca, calling 310-FARM, or by contacting your local municipality.