Wildlife Damage Compensation Program: What you need to know

With the onset of harvest season, an intense effort by producers around the province is underway to ensure the crops are being taken off the field in a timely manner.

Circumstances surrounding harvest may not always be suitable for a swift completion of the effort. There might be some damage to crops stemming from the 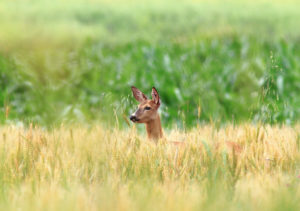 presence of wildlife in the area.

Wildlife Damage Compensation Program (WDCP), administered by AFSC in Alberta and funded completely by the federal and provincial governments, provides coverage for producers who suffer crop loss or degradation due to wildlife.

To benefit from this program, a producer does not have to have an insurance policy with AFSC, but it is important to know that not all crops are eligible under WDCP.

Here are some basic guidelines of how WDCP works:

– While producers pay no premium to be eligible for indemnity, a non-refundable $25 appraisal fee per inspection is required for each section of land (or portion thereof) on which the damage has occurred with at least 10 per cent wildlife damage and a minimum of $100 loss per crop must be assessed for payment eligibility.

– To initiate a wildlife claim on Stacked Hay and Silage or Haylage in pits and tubes, a producer must first contact a provincial Fish and Wildlife (FW) Officer who will provide the producer with appropriate recommendations to prevent further damage prior to a claim being paid.

– Crops under the following circumstances are not eligible: Crops in granaries, bins, stacks or bales left in the field (exception: silage in pits and tubes are eligible); crops seeded on land considered unsuitable for production; crops seeded too late in the season to produce a normal yield; volunteer crops; crops left exposed to wildlife damage due to management practices.

– Damaged crops must not be harvested until an AFSC inspector inspects them; loss assessments are not made from representative strips or swaths.

– Producers must contact AFSC at least 24 hours and preferably 72 hours prior to harvest so AFSC can arrange to have an inspector perform an on farm inspection. Producers should check their fields to identify the damage areas and will be expected to take the inspector to the damaged fields when they complete the damage assessment.

Wildlife damage compensation claims fluctuated widely over the years depending on the weather conditions and circumstances affecting the harvest. Records kept since 2000 show that 2016 was the worst year with the highest number of wildlife damage claims, followed by 2004.

In 2016, wildlife damage compensation totalled $24 million with almost three fourths of the damage caused by non-waterfowl birds and ungulates on about 108,000 acres while the waterfowl damage was spotted on about 35,000 acres. In 2004, the acreages impacted by wildlife damage were bigger than in 2016, 117,839 for non-waterfowl birds and ungulates and 41,891 for waterfowl, but the assessed damage was lower at just above $11 million.

For more information on details of procedures to apply for wildlife damage compensation, visit www.afsc.ca, phone (1.877.899.2372) or email (info@afsc.ca) Client Contact Centre. Staff at your nearest AFSC branch office will also be glad to help you with WDCP questions.