Weather patterns in the 2018 crop year posed challenges to producers in Alberta, and the impact of the weather phenomena throughout the year left the soil moisture levels much below normal. Reduced moisture levels have been particularly evident in southern and central Alberta with parts of Peace region also being affected.

A map on the Agriculture and Forestry Alberta website, dated February 4, 2019 and showing accumulation of precipitation over the last 365 days, points to pockets of extremely low levels of soil moisture in the south and central regions of the province, seen only every 25 to 50 years.

Accumulation of snow until the end of January was also assessed as below seasonal normal. 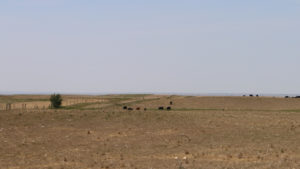 While the polar vortex of early February, which affected all of Canada and much of the U.S., brought some snowfall to Alberta, whether and how much that precipitation will replenish the depleted soil moisture in the regions affected by last crop year’s dry conditions has yet to be seen.

“Perennial insurance products are convenient tools for producers to keep in mind to ensure that their pastures, hay and export timothy hay crops are covered in case of continued conditions of low soil moisture.”

Sanden also reminded producers that insurance products covering hay and pasture include the Variable Price Benefit feature, which is automatically triggered in case of steep price fluctuations in the cost of hay during the growing season, increasing dollar coverage.

There is extensive information on the AFSC website on the AgriInsurance products available for perennial crop producers. Also on the website are tools to help producers to calculate their premium payments using the spring insurance prices, payment history calculators and historical moisture normals, among others.

The deadline to apply for the Perennial Crop Insurance is February 28, 2019.

For more information and to sign up for or make changes to their Perennial Crop Insurance options, producers should contact the nearest AFSC branch, call 1.877.899.2372 or e mail info@afsc.ca .