It only takes a few minutes of conversation to realize that new AFSC Board Chair Mabel Hamilton is passionate about agriculture and cares deeply about the industry and its future.

Hamilton, who operates a family-owned central Alberta livestock business with her husband Gavin, son Colton, daughter Quinn and son-in-law Brendyn, has immersed herself in 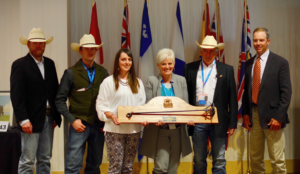 the industry both as a producer and as an advocate. She has been involved in the purebred cattle industry for over 40 years and has more than 30 years of experience on numerous provincial and national agriculture boards and commissions.

“I guess the cliché is that it’s a way of life, but it’s also a passion for us. I really appreciate the kind of lifestyle we’ve been able to have. I have an appreciation for what we do with the land and how the land is really a gift to us, so we have to leave it as we found it, or better.”

“I guess the cliché is that it’s a way of life, but it’s also a passion for us. I really appreciate the kind of lifestyle we’ve been able to have. I have an appreciation for what we do with the land and how the land is really a gift to us, so we have to leave it as we found it, or better.”

Hamilton said she is frustrated when people, often from urban settings, think they know what is best for the land. She points to the current situation where some people argue that we shouldn’t eat beef because it is bad for the environment, without understanding that much of the land used for cattle production wouldn’t make good crop land and has been grazed by bison for centuries.

“Part of our passion and what drives us forward is to make sure consumers understand what we do (as producers.)”

That desire to share knowledge and the need for a challenge is what got Hamilton started as a volunteer and agriculture advocate. Hamilton, a teacher, decided not to return to teaching after the birth of her second child.

“I was looking for something that would give me an additional challenge.”

“(The Canadian Cattle Identification Association) was the one where we started with the identifiers in cattle,” said Hamilton, who was chair of association during that time. “It was extremely challenging because we were starting a program that would identify where Canadian cattle were born, where they were raised, where they were fed and where they were harvested.

“And there was push back, to put it mildly.

“As it turned out, it was the best thing we could do (in light) of some of the things that have happened in the industry.”

Hamilton’s efforts in the agriculture industry have not gone unnoticed. In 2012, Hamilton was inducted into the Alberta Agriculture Hall of Fame in recognition of her dedication, hard work and leadership.

“My mother used to say, ‘If you belong to something, you don’t sit as a bump on the log, you participate and become involved.’

AFSC Board of Directors

In mid-April, the government announced new appointments to the AFSC board of directors, including Hamilton as board chair. As a hands-on producer, Hamilton thinks she brings a different perspective to board.

“I don’t think AFSC has had a hands-on producer as a board chair for a while,” commented Hamilton. “We have crops as well as our cattle, so I think I will bring a different perspective to the board. It’s always good to have somebody who is at the ground level give their opinions or direction.”

Over the course of her term as board chair, Hamilton hopes to help elevate AFSC and make people more aware of AFSC and what it offers.

“I think that AFSC has done a lot of marvelous things, but I do think there is a bit of a misconception in the country about what it does and doesn’t do,” said Hamilton. “I think we need to enhance the brand and make people aware of what’s available for them.

“AFSC is there for them.”