Dogs have an innate ability to detect scents, and with training, they can pinpoint explosive materials, drugs, missing people, and human remains. This is due to the over 300 million olfactory sensors in their noses.

This has led researchers to wonder if dogs can detect other things, like plant diseases—and it turns out they can.

Research projects are ongoing around the world to explore dogs’ abilities to detect a number of plant pathogens, including laurel wilt in avocados and citrus greening in oranges, limes and other citrus fruit.

Closer to home, work has also been done to explore the capability of dogs to detect clubroot. Mike Harding, a plant pathologist with Alberta Agriculture and Forestry, conducted a project in 2019 to determine if dogs could detect the presence of clubroot galls in a controlled environment and in a field setting.

The project team was made up of dog trainers Mario Bourque and Bill Grimmer and Farming Smarter General Manager Ken Coles. Harding provided the 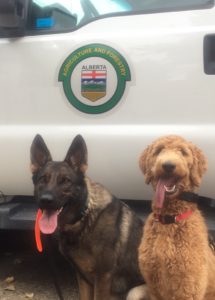 scent material and plant expertise, Bourque and Grimmer the dog-training experience, while Coles helped coordinate the project financially and oversaw the administration of the project. Josie and Adi, two dogs selected by Grimmer, provided their scent detection skills.

The team came together when Bourque, who had read an article about dogs being used to detect laurel wilt in avocado crops in Florida, wondered if dogs could be used to detect plant diseases in Canadian agriculture. He began making calls to plant pathologists, and soon enough called Harding, who had also read about the dogs working in Florida’s avocado groves.

“He had some ideas of diseases that he thought might be good to search for, and I said, ‘Well, I’m not really interested in working with those. I think we already have good detection methods for them. But, there is one disease, clubroot on canola, that we often detect way too late, because we can’t see the symptoms. Maybe the dogs could essentially see underground with their noses and detect these symptoms early.’”

Harding, Bourque, Grimmer began looking for funding for the project to see if dogs could indeed detect clubroot. Coles helped the team secure the necessary funding and work began to train the dogs to alert to clubroot galls. Once the training period was completed, the dogs were tested both in a controlled location and in a field setting.

“The exciting part for our study was that it is really, really clear that the dogs can recognize the scent of clubroot galls,” said Harding. “In the clinical studies that we did (meaning that the dogs were in a room with eight jars, one of which had the scent material), they could identify the clubroot 100 per cent of the time.

“Once they’d been trained to what scent they were supposed to alert to, they got it right every single time.”

To further test the dogs’ abilities, the trainers and the dogs came to Alberta for field-testing. These new locations initially posed some challenges for the dogs. Additional scents and other distractions meant that the dogs’ accuracy dropped during the first day of field-testing.

Harding said there is potential for their findings to lead to additional study and testing depending on interest and need within the agriculture industry.  This includes using dogs to scout for other crop diseases, inspecting warehouses and storage facilities for diseases of concern, and inspecting equipment or soil for the presence of plant pathogens, including clubroot.

“We had worked with the symptomatic root material – canola roots that are swollen and have clubroot galls on them. That was the target scent, but what we don’t know is whether the dogs can specifically detect just the resting spores.

“Lots of times it’s the resting spores that allow us to determine what the risk of clubroot is in the field. Can dogs detect the resting spores in the soil; that would be really valuable, because then you could scout fields regardless of whether there is a canola crop or another host crop in that field.”

While the initial project has concluded, there is still interest in the potential of dogs’ clubroot detection abilities. Harding said they have provided target scents to close to a dozen approved dog trainers in Alberta, who are continuing to explore the feasibility and possibilities of canine clubroot detection.

“(The initial project) generated way more attention than pretty much any other project I have ever worked on,” commented Harding. “I think the dog aspect has a lot to do with that. It’s become a popular project, but is there going to be any real industry significance or relevance, I think that remains to be seen.”